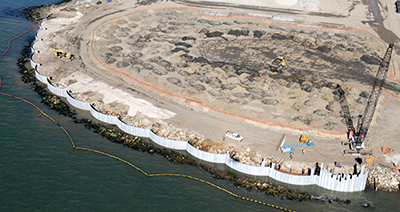 PND is proud to announce that the Alameda Point remediation project in California was awarded the Chief of Naval Operations Environmental Award in the Environmental Restoration (Installation) category. This $20 million remediation project on San Francisco Bay features PND’s OPEN CELL SHEET PILE™ Waste Isolation Barrier (WIB), which encapsulates and safely retains contaminated material that was bulldozed into the Bay approximately 60 years ago.

“The arcs in the wall, with the wall itself forming an arc at the northern end, along with the gray patina of the metal, makes it look architecturally pleasing, rather than utilitarian - almost like there is going to be a ‘Welcome to Alameda’ monument sitting behind the wall.” -Richard Bangert, author of the Alameda Point Environmental Report. [08/28/14]

Alameda Point was formerly the Naval Air Station Alameda, which was closed in 1997 and designated a Superfund site by the U.S. Environmental Protection Agency (EPA) in 1999. While there has been minimal human activity at the site, Alameda Point is located near extensive wetland areas. Facing a technically challenging and lengthy environmental cleanup, the Navy chose the innovative WIB technology, which consists of a series of interlocking sheet piles driven into the soil to create isolation cells that contain the buried waste. “The Waste Isolation Barrier was protective of human health and the environment, cost effective, maintained the property transfer schedule, and reduced greenhouse gas emissions that would have been released into the atmosphere by excavation and truck transport of the radiologically contaminated soil.” Use of the WIB resulted in cost savings of over $25 million and shortened the project schedule by approximately three years.

Preliminary design by PND included a liquefaction and lateral spreading analysis, cathodic protection design, cost estimates for materials and construction, and engineering support for preparation of the feasibility study report. PND also provided an assessment of sheet pile permeability for the report, which evaluated the hydraulics and provided recommendations for input to the groundwater flow numerical model.