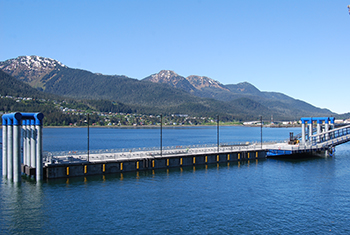 Extensive planning and geotechnical investigations were conducted prior to the design phase of the project to determine the optimal layout and existing site conditions. The planning included an intensive public involvement phase to address a number of concerns from local users. During this planning phase, the alignment of the cruise ship berths was rotated away from shore into water depths of 100 feet, and a 400-foot-long navigation boom was added to the project to accommodate concerns of fishing boats accessing a local seafood processor. The geotechnical investigation revealed that SPIN FIN™ pile tips could effectively be used instead of costly rock anchors at many locations to significantly reduce the overall cost of the project. 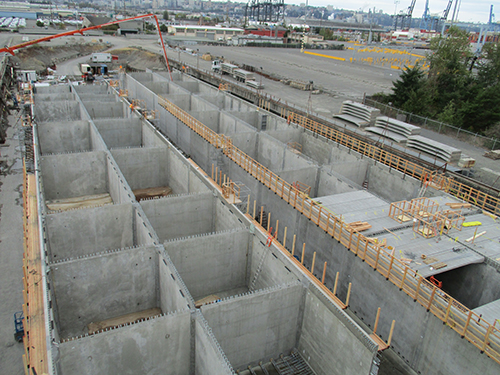 The project required a phased construction sequence over two years due to the limited access period and to allow for continued use of the existing cruise ship docks between phases. The first phase of the project, the South Berth, included a 300-foot-by-50-foot concrete pontoon constructed by Concrete Technology in Tacoma, Washington, and towed to Juneau by the contractor, Manson Construction. The concrete pontoon is anchored with steel pipe piles utilizing SPIN FIN pile tips. The South Berth also consists of seven mooring and breasting dolphins utilizing a combination of rock anchors and SPIN FIN pile tips. The rock anchor rods were installed in drilled, grouted sockets 40 feet below the bottom of the pile tips. The rock anchors were then proof-loaded to 600,000 lbs. The concrete pontoon is accessed by a 140-foot-long orthotropic steel bridge from a 175-foot-long timber-framed approach dock. In addition to providing vehicle access, the bridge has a separate covered area for pedestrians. The approach dock connects the South Berth to the recently updated Mount Roberts Tramway and visitors center areas in downtown Juneau. A 200-foot-by-16-foot concrete mooring float and 120-foot-long covered aluminum gangway were also installed with access off of the approach dock. The new berth also updates the water service provided to the cruise ships, allowing them to take on more water at a faster rate while in port. The new berths have the cruise ships positioned offshore from the existing dock, thus eliminating the extensive amount of fencing and other security requirements currently required along the dock. The project was completed a week ahead of schedule, well under budget, and with change orders less than 0.8% of the bid amount, representing a remarkable achievement.